You are here: Home / Meet Our Pastor 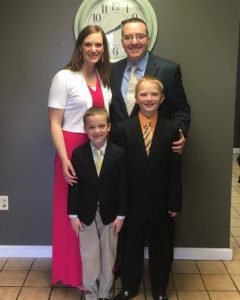 Pastor Vince Stover – Pastor Stover was raised in a Christian home in Murfreesboro, Tennessee. He was saved at the age of 4 in his home and baptized shortly after. He graduated from Maranatha Baptist Bible College in 2006 and served for 5 years on camp staff at the Bill Rice Ranch in Murfreesboro, Tennessee. In January of 2011, Vince became Pastor at Gospel Center, an independent Baptist church, in Petersburg, Indiana. Three years later, in 2014, the Stover’s followed the Lord’s calling to plant Bible Pathway Baptist Church.

Pastor Stover and his wife Katie were married in 2006, and have two sons, Brett and Camden.

Listen to past sermons here: https://anchor.fm/BPBCLexington

Message from the Pastor

Bible Pathway Baptist Church is getting back to the basics of church. All services are traditional, all congregational singing is from a hymn book, and the preaching is always straightforward and helpful. BPBC offers a friendly atmosphere, with a focus on helping individuals and families from the Bible. I want to personally invite you to come visit us for our services.